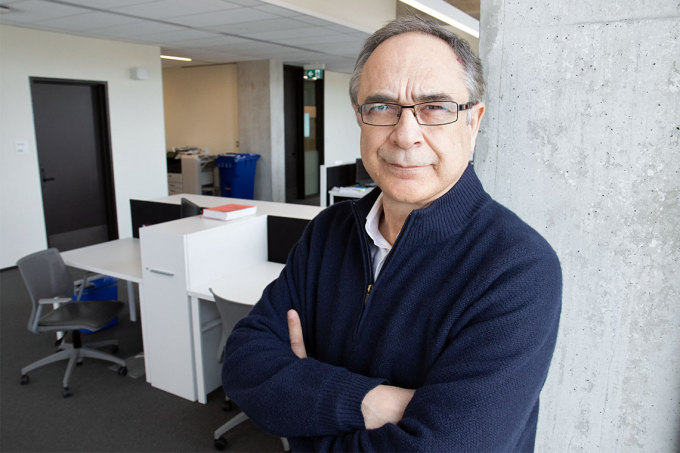 How do you make industrial effluent – the discharged liquid waste sitting in tailings ponds and other bodies of water – clean enough that it can be reused?

Vladimiros Papangelakis (ChemE) answered that question by treating water as a chemical.

“You have to do something to preserve, recover and reuse,” said Papangelakis, who is also the director of the Institute for Water Innovation. “To the same extent, you do similar things for all other expensive chemicals in any chemical process.

“The design is always in a way that you don’t waste your expensive chemicals.”

His forward osmosis-freeze concentration (FO-FC) hybrid process integrates the use of a spontaneous osmotic membrane step with natural freezing and simple chemicals, such as common salt, to separate and recover water from contaminated industrial effluents.

The water will likely not be drinkable after the process, he said, but it will be quite acceptable to be reused for industrial projects, which means the chemical plan won’t need to draw as much fresh water for its operations.

Forward osmosis is a process that has been refined and tested for about 10 years, using salt solutions like ammonium carbonate that decompose to gases and separate from the solution with modest heating.

Papangelakis and his research team were working with a new FO chemical invented by the Queen’s University department of chemistry. At the same time, his team was building a freezer unit simulating the effect of freezing on a Canadian lake in the north in order to produce ice to clean dirty water – when a eureka moment struck.

“The eureka moment was when we tried to combine these two things,” he explained. Instead of using a smelly, organic salt, “we found out that we could use any salt, if we combined the two processes and still be able to pull water through the membrane with minimum overall energy cost.”

In the end, the ice becomes the cleaner water that is recycled for industrial use.

“My shift (in thinking) is to the medium itself, treating water as a chemical rather than as something that is abundant and there in infinite amounts.”

Papangelakis said he believes FO-FC could have local applications in Canada taking advantage of the cold in winter, with the mining, food and oilsands industries. With the Connaught Innovation Award, his research team can begin to build an integrated prototype to demonstrate to industrial partners.

“When you compete with the entire university powerhouse – of  brains and ideas – the fact that your idea is being recognized as the winning ones is a satisfying thing.”